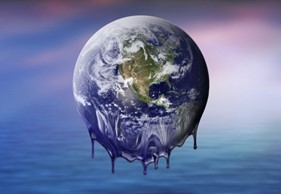 Global warming is not only causing climatic temperatures to rise— but it is also heating up the socio-political scene across the globe. Caught in the crossfire is the airline industry, targeted by environmental activists who categorize flight as an unnecessary mode of travel.  As this movement gains momentum, how will  air fare in this age of flight-shaming?

Three forces related to environmental issues are combining to create turbulence for the airline industry:

Anna Hughes has not taken a flight in 10 years; she founded Flight Free UK and only travels by ground transportation.  Greta Thunberg has vowed to remain out of the air.  She chose a two-week boat ride to New York for the UN meeting, in place of an hours-long flight.[2]  These scenarios are extreme examples of efforts in reducing greenhouse emissions that are meant to influence others to choose alternative efforts.

The Swedish term ‘flygskam’, which translated means “flight shame,” was coined to encompass this movement that took its roots in Europe. Foregoing flights is not an option for many, and this movement seems far-fetched. In countries with the strongest flight-shame movement, airlines have seen a three percent decline among domestic flight customers. Rickard Gustafson, chief executive of Scandinavian Airlines has felt the growing pressure of this movement. In just six months’ time, it has grown to a top priority in executive meetings.  He explained the concerns within his industry: “If we don’t clearly articulate a path to a sustainable aviation industry, it will be a problem.”[3]  Environmental issues have been discussed for decades, but shifting attitudes toward climate change global warming have fueled the recent rapid growth in accepting these movements.

A study done by Yale University shows the change that has taken place in American attitudes toward climate change. 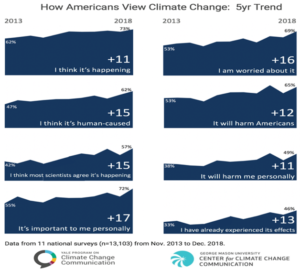 From 2013 to 2018, awareness of climate change heightened  across all of the questions asked in Yale’s study.  This increased awareness is found not only in America, but also world wide , as this issue has become a frequent topic in media and politics.  According to the Yale surveys, 46% of people have experienced the effects of global warming and 72% say that it is personally important to them. These numbers are huge. If the Flygskam movement gains traction throughout the world, this demographic has the potential to cut back on their air travel and put their money toward alternative modes of transportation.

Social media has been both a means to promote the airline industry and a tool to promote activism against it. In today’s culture of travel bloggers and “look-at-me” destination photos, consumers desire air travel to reach both international and domestic destinations vacations.  Global tourist arrivals are expected to increase by 5.2% each year for the next five years.[5]  Social media has also been a major platform for sharing global warming protests and organizing movements against many industries, including the airline industry.  Greta Thunberg has gained an impressive 8.2 million followers on Instagram in less than two years.[6]

Activist Anna Hughes explains, “Most people are unaware of how flying affects the environment.”  But, a 2019 article in Financial Times states that, “awareness is growing fast though, as climate concerns have sparked a public backlash against flying that would have been almost unthinkable even a year ago.”[7]  A fast-paced awakening is threatening to cause turmoil for the airline industry as many people are learning of the effects of global warming.  Pressure is mounting on world leaders to act quickly in regulating the amount of pollution through policies and restrictions. 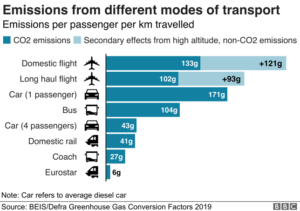 This graph shows the amount of emissions from a single flight in comparison to other modes of transportation.  Increasing awareness is causing a need for airlines to address changes in the perception of the industry from their customers.

With this new awareness comes a call for politicians to address the issues of emission pollution and find solutions. Most notable was Thunberg’s searing speech to world leaders at the U.N.’s Climate Action Summit:

This is all wrong. I shouldn’t be up here. I should be back in school on the other side of the ocean. Yet you all come to us young people for hope. How dare you!…you! … For more than 30 years, the science has been crystal clear. How dare you continue to look away and come here saying that you’re doing enough, when the politics and solutions needed are still nowhere in sight?.[9]

Her speech made headlines internationally and was shared widely on social media, reaching millions of viewers.  The Flygskam movement is currently putting pressure on European airlines but will likely move further along as popular activists influence and educate followers on these issues. If regulations are imposed on airline industries, the resulting barriers could cause financial risk and the subsequent demise of millions of jobs.

The global airline industry is responsible for creating 65.5 million jobs around the world.[11]  Officials will propose regulations to help reduce the environmental impact of air travel but will be wary to upset millions of jobs and billions of dollars in revenue.  Any regulations that will be implemented will give adequate time for airlines to work out solutions and maintain maximum economic stability and growth within their industry. Environmental activists recognize this political attitude and have doubled down on their cry for action.

Daniel Röska, is an analyst at Bernstein., he says that a person’s opinion does not always reflect their willingness to act on those beliefs.  He does not believe that people are willing to sacrifice air travel because they have a desire to battle pollution.  However, he does believe, however, that governments could use these concerns to raise air taxes which would lead to more expensive air travel and, “this in turn will reduce the cheapest, least valuable demand in the market.”  He adds that it, “will likely lead to a slower growth for aviation in markets that push the emissions agenda.”[12]

Just this year, France implemented a tax on all flights leaving their country. The tax did not hit hard on the wallets of travelers, but is an indication of a regulating pattern we will see as politicians try to earn the vote of environmentally-friendly voters.[13]  Röska’s predictions may come into fruition quickly if environmental movements press forward with the same energy that has been observed this last year.  All of these factors are working together to create troubled waters for the airline industry.

Global warming is a topic that will become increasingly prioritized among people, politics and industries.  Because there are substitutes to air travel that leave a smaller carbon footprint, airlines will see a shift in their customer base to other modes of transportation as the flight shame culture will spread to other areas in the coming years.  While this does not signal the end for the airline industry, it does signal a change and loss of business within markets that have a Flygskam culture.  The airline industry will be affected as a whole due to the changing cultures around travel.

Moving forward, the airline industry needs to aggressively seek environmentally-friendly choices and solutions with less greenhouse gas emissions.  Global warming is here, it is man-made, and it is affecting industries around the world.  In order to remain relevant, the global airline industry must counter activists’ calls by proving its capability to reduce emissions and work ahead to find solutions to impending regulations.

[3] Conboye, Hook. “Flight Shame: Can Airlines Ever Reduce their Emissions?”

[7] Conboye, Janina and Leslie Hook. “Airlines Face Flight Shame Turbulence: Spurred on by Environmental Activists such as Greta Thunberg, there is a Growing Consumer Backlash Against Air Travel. however, the Industry has Few Easy Technological Solutions to Reduce its Emissions. by Janina Conboye and Leslie Hook Asia Region].” Financial Times, Aug 28, 2019. https://search-proquest-com.erl.lib.byu.edu/docview/2298557921?accountid=4488.

[12] Conboye, Hook. “Airlines Face Flight Shame Turbulence: Spurred on by Environmental Activists such as Greta Thunberg, there is a Growing Consumer Backlash Against Air Travel. However, the Industry has Few Easy Technological Solutions to Reduce its Emissions.”

[13] Conboye, Hook. “Airlines Face Flight Shame Turbulence: Spurred on by Environmental Activists such as Greta Thunberg, there is a Growing Consumer Backlash Against Air Travel. However, the Industry has Few Easy Technological Solutions to Reduce its Emissions.”