The modern smartphone has more computing power than was used to send Apollo 11 to the moon in 1969. While this is an impressive feat signifying how far we’ve come with technology, some people in the business world have been asking themselves, what other advances have been made in computing that will revolutionize the world?

Normal computers store information in terms of binary, or 0s or 1s, each of which is called a bit. These bits are read by a computer extremely quickly but can be read only one at a time. These stored bits are read by the CPU (central processing unit) in a computer as either a 0 or a 1, meaning a no or a yes. This series of a no or a yes is repeated many times until the computer is able to produce a result. This method works very well for basic calculations.

In quantum computing however, any bit (or in this case, qubit) can have the value of 0, 1, or both simultaneously.[i] Instead of having a string of just a no or a yes, the computer can process a no, a yes, or both. This shift from exclusively 0s and 1s to 0s, 1s, or both causes the computing power to go from number of bits squared (two options per bit) to number of bits to the third power (three options per bit). The increase in computing power is exponential. Current computers are also limited to running a single process per CPU (a single 0 or 1 at a time per processing unit). According to Robert Hackett, these quantum computers could potentially process multiple assignments at once.[ii]

The following graph roughly illustrates the difference in processing power between a CPU and a QPU (quantum processing unit). The difference between the two is the number of potential permutations of 10 bits (e.g., 0010110010) compared to 10 qubits. The contrast shows the computing power of a quantum computer. 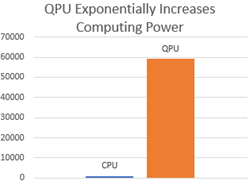 A company called D-Wave announced a 2,000-qubit computer in 2017.[iii] Although D-Wave’s devices only outperform most classical computers in defined, specific tasks, a more versatile 2,000 qubit computer could one day staggeringly outperform all conventional computers. To illustrate this vast difference, the graph above outlines the potential difference between a 10 bit and 10 qubit computer. The comparison at 2,000 bits and 2,000 qubits would be exponentially greater.

When speaking of the potential of quantum computing, MIT Professor Michael Cusumano states, “Even 300 qubits can represent information equal to the estimated number of particles in the known universe.”[iv]

Data processing. Businesses thrive on their ability to receive and process data quickly.[v] If one company can successfully implement quantum computing before others in the industry, that company would soon develop a sizable lead on its competitors. It would be able to receive large amounts of data from customers as well as from internal functions (such as finance or marketing departments), process that information with much greater speed, and output relevant statistics to upper management. With more information, managers can make better-informed decisions about directions to take the company. Reporter Amy Thomsen shares the news that Google accomplished a ten-thousand-year task in 200 seconds with quantum computing. However, Thomsen also states that the task could have been performed in 2.5 days with a normal computer but only “with enough hard drive storage.”[vi]

Storage. For this reason, quantum computing could save building space as well. Because of a CPU’s relatively limited ability to store large amounts of information as it processes it, buildings dedicated entirely to computer servers would have to be much more common in order to process the same amount of data as a QPU.uantum computer was able to perform its task without large amounts of hard drive storage.[vii] Today’s computers are capable of outperforming most quantum computers, but only with very large processors and hard drives.

In addition, each time a computer needs to get information from a hard drive, the computer’s process slows considerably—in Google’s case, roughly 2.5 days.[viii] The CPUs had to access the hard drives so often that the process became extremely slow. Quantum computing, once fully developed, will be able to perform complex tasks with much greater speed. This faster data process will help businesses function on a higher level than ever before.

For these reasons alone, businesses must invest in quantum computing research in order to survive. Without it, businesses will soon start to lose ground to competitors in their respective fields.

Cusumano shares his opinion that quantum computing should not replace current computer processes, however. He presents these advanced computers as specialized tools to be used in only certain situations. This is because normal CPUs are much cheaper and faster to use when performing simple calculations or basic mathematical formulas. When doing complex parallel processes, such as “optimization and simulation, cryptography and secure communications, pattern matching and big-data analysis, and artificial intelligence and machine learning,” Cusumano recommends a quantum computer.[x]

Authors Farai Mazhandu, Kayleigh Mathieson, Christopher Coleman, and Somnath Bhattacharyya share their findings that quantum computers are “predicted to outperform classical computers in a wide range of tasks including machine learning, complex simulations, and optimization problems.”[xi] Their statements are very similar to Cusumano’s in that quantum computers will have very specialized functions and will significantly outperform normal computers in regards to processing large amounts of data (such as in optimization).[xii]

Alex Knapp and Robert Hackett are not experts in the field of quantum research, but both understand the political and economic impact that such changes in technology could have. They state that the Republican and Democratic parties have laid aside differences in order to pursue quantum computing research and development, leading to Congress setting aside more than $1 billion in order to accomplish these goals.[xiii] Knapp shares that the primary motivators are improvements to supply chain management, logistics, and security.[xiv]

Quantum computing is not quite ready for complete implementation. Google was the first company to claim quantum supremacy—meaning when a quantum computer is able to out-perform a normal computer—which just occurred in October of 2019.[xv] Given that this happened just a few years ago, (and with some public speculation as well), companies and researchers are going to need more time before quantum computing becomes a complete reality. Authors Mazhandu, Mathieson, Coleman, and Bhattacharyya imply in their research that true quantum supremacy has not yet been achieved.[xvi] Even when quantum supremacy is realized, as Cusumano states, quantum computers may not be used for every process; in fact, they may have very specialized uses.[xvii]

Despite these limitations, quantum computing will radically change the future of business around the world. Cybersecurity, both offensive and defensive, will be permanently altered. The ability that companies have to process big data will increase exponentially, aiding in the decision-making processes of those companies.

In short, business is rapidly approaching a fork in the road. Although the general populace will likely always have a use for normal, binary-processing computers, businesses will not be able to survive without the use of quantum computers in the coming years. Companies that invest in quantum computing will be propelled forward while those that do not will fall behind.

This week on our issue highlight article, Melissa

Here is a quick video highlighting our team’s be

We are so excited to announce our new spring issue

This week on our podcast, Measuring Success Right,

This week’s podcast was a little different :) We

Join Diego Calderon and Spencer McWilliams as they

Students are graduating with more debt than ever b

In her article, Chloë Breckenridge provides these

In her article, “Mind the Gap: Creating Mindfuln