Graduation day is here. As you walk across the stage to receive your diploma, you begin to reflect on this chapter of your life. You smile as you remember that the late-night study sessions and early morning classes are a thing of the past. You sigh in relief as you realize that every quiz, mid-term, and final exam is officially behind you. You should be stress free, right? Wrong. You look down and see your diploma in your right hand, but six figures of debt in your left. You ask yourself, “How did this happen?”, and, “What should I do from here?”

Expensive schooling is partially to blame. Higher education is among the fastest-rising costs in American society today. School tuition has outpaced the rest of the general economy, causing the average American graduate to have nearly $40,000 of debt. A ten-year loan at 4.32% compounded monthly means that they would be paying $382 a month for the next decade.​1​ How much you borrow, and at what terms, have a large impact on your budget, credit score, and future loan options.

High tuition is not the whole story, however. Several social influences, including social media, share in the blame because they can negatively influence young adults to make poor financial decisions, trapping them inside their debt. As a society, we are prone to valuing what we could have now above what we could have in the future. For this reason, many young adults find themselves bankrupt and defaulting on their credit card payments. Young adults and graduate students must avoid social trends like millennial entitlement, “fear of missing out” (FOMO), credit card schemes, and subscription services in order to be successful and debt-free.

Increasing millennial entitlement is leading to poor financial choices​, ​and parents are the chief culprits here. The new phenomenon of “helicopter parents” is partly due to the decreasing size of families. A recent study conducted by Gallup and Pew Research Center outlines the steady decrease in preferred family size over the past century. In the 1930s, the average family had 3.6 kids; in the 1970s it had already decreased to 2.9, and today the average is falling to nearly two children per family.​2 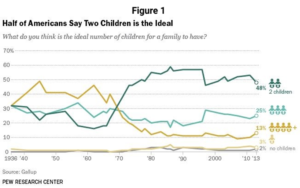 As depicted in Figure 1, today nearly 50% of Americans say that having two children is ideal and less than 15% want four or more. With fewer children, parents are able to spend more on each child, buying them nicer clothes, taking them to fancier restaurants, and traveling to more expensive places. This form of parenting provokes a belief in the new generation that they are inherently deserving of these privileges and special treatment. Children ask and they receive, rarely hearing a “no.”

Chris Sasser, a family pastor and child play therapist, notes this trend, calling it the “Let Me Rescue You dilemma.” Parents are afraid to see their children suffer, thus, they closely ‘hover’ over their children and ‘rescue’ them from all their problems. Sasser explains the negative effects of this parenting​ style:​ “It is easier to let them fail with these little things now (like forgetting homework and losing recess time at school) instead of failing when they are adults (like forgetting a mortgage payment and losing their house).”​3​ If you do not learn discipline and how to save up money to buy something for yourself as a child, you will not be able to do the same when it really matters.

Credit cards and bank loans are so easily accessible these days that young adults are failing to think before they act. Across the nation, credit card companies set up stands on college campuses, preying on ignorant college students. They design credit policies with small, incremental perks, such as signing bonuses, free miles, gas discounts, cash back, etc., that appear attractive to the young eye. However, all these perks are astronomically outweighed by the hidden monthly compounded interest accumulating behind each loan and purchase.

Deborah Thorne, associate professor of sociology at Ohio University​, ​explains the effects of huge student loans. Thorne says, “​Many people who file bankruptcy and default on their credit card debt have, prior to filing, repaid the principal. And sometimes, because of interest and fees, they have repaid that principal multiple times. As such, regardless of bankruptcies and defaults, credit cards are still highly profitable for lenders.” These companies continue to hand out student loans knowing they will get their money back, if not more. Several negative effects ripple from this initial credit card default. Research shows that college students end up facing greater problems down the road when they attempt to get loans, buy houses and cars, and obtaining employment.4

Urban Migration and “Fear of Missing Out” Cause Deeper Debt

Young adults are generally attracted to an expensive lifestyle and its accompanying FOMO. This is magnified by the constant barrage of social media posts that shout, “Look what I’m doing.” Once they graduate from college and land their first job, they have to make some significant life choices. Will they live in a house or an apartment? In the city or outside the city? Will they drive a car or take the bus to work? Each of these questions has an economically advantageous choice, yet young adults are choosing the wrong one.

Studies show that young people are a driving force in the urban resurgence of the past two decades and that they favor living in central urban neighborhoods.5​ These urbanized areas tend to have more expensive housing, food, entertainment, and services. Higher salaries, new ambitions, and millennial entitlement tempt young adults to migrate to cities in pursuit of nicer apartments, fancier furniture, and upgraded cars, causing them to spend more than they can afford. Richard Florida, researcher of urban movement at the University of Toronto’s School of Cities, explains the effects of young adults’ urban orientation: “​20% of city dwellers say they spend more than they make most months, and the top financial goal cited among urbanites (51%) was to become financially stable​.”​6​ Because students leave college with such high debt, they form the underlying thought in their head that, ​“​I already have $150,000 from student loans, so what is another $10,000?”

Despite social media’s powerful influence on young people’s choices, young adults can overcome this peer pressure. A young millennial who goes by the pen name Sean shares his story of saving over $150,000 by the age of 26. His number-one advice to young adults is the following: “What makes ​you​ happy is not decided by your friends, your neighbors, or the commercials on TV… Just because your friends enjoy spending lavishly on clothes, doesn’t mean that’s for you … Don’t waste money on things that aren’t important to you.”​7

The last social factor that induces young adults to fall into debt is monthly subscription accounts.

You are most likely spending more each month than you know on subscription services. A Waterstone Group Management survey reveals that over 84% of young adults underestimate what they spend on digital subscriptions. The survey committee randomly selected and asked 2,500 young adults in the United States to estimate how much they spend on “recurring monthly expenses associated with digital services, devices and subscription boxes.” The original average estimate was $79.74. The next stage of the survey prompted each subject to include more specific subscription-based services, such as Netflix, Dollar Shave Club, Xbox Live, Apple Music, etc. The average rose to $111.61— a 40% percent increase. During the last stage of the survey, all subjects were shown a complete list of possible expenses, including cellular plans and Wi-Fi. The average shot up to $237.33— a 197% increase from the original average estimate. Figure 2 below lays out the three-step survey and illustrates the huge underestimation of monthly subscription expenses. 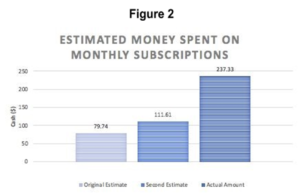 These results reveal alarming, yet hidden expenses among young adults. Nicole Lyn Pesce, senior reporter of Dow Jones Media Group, details this process, saying, “subscriptions and recurring orders are automatically deducted from your bank account or charged to your credit card, you forget that you’re even paying for them. So it’s not surprising that about one in ten millennials spend $200 or more every month on subscription services​.” 8​

Slow and Steady Wins the Race

Are you still looking for a job post-graduation? I

Too many people are suffering from workplace miser

We here at MSR are joining the maskerade, are you?

“Success is a feeling I live in!” This week, c

“Success is growth!” Tune in for this week’s

Brainstorming solutions as a group is a great idea

We’ve got AMAZING students on our MSR board, and